Hindered And Helped By The Internet

Stupid internet with it’s tickets-only-available-online stupidity. In my last post, I spoke of how I was excited to go to the next event for BBQ Films.The husband and I were going to get dressed up in our 1950s best (or the only outfit we have that would make a fair approximation), and go see Back to the Future next weekend.

But… all the tickets are sold out online. There isn’t anywhere to physically go pickup tickets. I hate that!

When our mothers came to town and we went to go see Motown the Musical, buying tickets online was frustrating (and expensive), so I just went to the box office and a real live human person helped me find the perfect seats.

This isn’t an option for BBQ Films, which is understandable as all of their events are funded by tickets sales and sponsors.But still, I had no recourse once I saw the tickets were sold out online.

So now I know what i’m doing Thursday.

I’m trying to be a good Wine School Pupil. I joined up wholeheartedly. But then… I couldn’t find any of the wines. After striking out at my favorite wine shop, I took to the internet.

I was starting to get discouraged. Comments on the Bordeaux NY Times article were starting, and I really felt some kind of way about the people commenting who drank substitute wines. I didn’t want to be a substitute wine drinker, but unless my wine guy called me back saying he found it, I was screwed.

Then it occurred to me, I hadn’t asked Google for help. Well, I had asked, but I was asking the wrong questions.

Googling online wine shops was how I went about it at first. When I got wise, I went straight to Google Shopping. They have this crazy index of pretty much everything available for sale online.

So I Googled each of the three  wines listed in the article. Immediately, I was directed to a couple of different wine shops. Because I’m a nice lady, I’ll tell you where I found it.

Premier Wine & Spirits is a specialty shop with four different websites, and three brick & mortar locations in NY State. This is my first time ordering from them, so who knows if it will work?

I do shop online quite a bit though, and I’ve never had any issues getting alcohol delivered. I ordered a bottle of the Château Bernadotte Haut-Médoc 2009 last night, so I’ll let you know how long it takes to get here and what shape it’s in when it arrives.

I chose this bottle because it was the cheapest of the three, but they are getting over on shipping costs. The wine itself was only $34 including tax, but went up to $49.15 with standard shipping. Good thing I didn’t want it overnight, I would pay double for the wine.

Can I just say those people take identification seriously? Based on all the information I had to enter to prove I was me and to purchase the wine, I was feeling suspicious. But a check online on Webutation and a look to see if anyone identified the website with scams (they didn’t) made me feel pretty good. At least I’ll know the culprit if my identity is stolen over this. Knock on wood.

Easy and I agree that we will try the recipe for Skirt Steak with roasted whole plantains with the wine. I’m pretty excited about that.

I had a very indecisive 20 year old visiting this past weekend for her Spring Break. I wanted to show her NYC in all its beauty, but that proved difficult. She’s not a fan of art, sports, museums, history, eating when you’re not hungry, spending a bunch of money, theater, or overspending on shopping.

Unfortunately, that also meant no going to the Biennial exhibit at the Whitney. But hopefully one of my new maybe-friends in NYC will go with me.

She arrived in the middle of the week, so by the time Saturday rolled around, she was shopped out. Easy and I forced her to go with us to a Latin restaurant and to a jazz club, so I at least wanted to have her do something she’d be guaranteed to enjoy on her last day with us.

If you missed that list of things she was against (at age 20!), you know I had my work cut out for me.

Suffice it to say we spent hours at Central Park while she tried to figure out what she wanted to do. I could’ve offered up Chelsea Piers, but I really didn’t want to take her bowling. Then I thought about High Line, but we were already at a park, so heading to another one just seemed wrong.

Hopping on the internet for what do to in NYC ideas when you’ve ruled out food, drinks, arts, sports, history, theater, museums, and shopping is just painful.

We ended up on the Staten Island Ferry so she could get pictures of part of the skyline and the Statue of Liberty. While we were waiting on the ferry, she mentions that she’s going through ice cream withdrawal.

I remind her that I said, “this is New York City. Anything you want to do, try, eat, drink, whatever, it can be done here. Anything in the world, literally, anything. Just pick something, and we’ll go find the best version of it New York has to offer.”

I said that hours before she mentioned the ice cream.

But at least we had a goal. Searching online for great ice cream in New York is super focused and wonderfully easy. Between Google, Yelp, yellowpages.com, and Zagat, we found a lot of great ice cream options.

Because she waited 6 hours to finally decide on a New York adventure, most of the places were closing for the night. But seeking out great gelato, egg creams, frozen yogurt, and ice cream in New York at places only open after midnight is it’s own mini adventure.

We ended up going on a food truck search for Wafels and Dinges. They weren’t hard to find. The truck was parked in the West Village, so after that we got a slice at Joe’s Pizza and then popsicles at Popbar.

For an improptu food tour, it was quite successful. Wafels and Dinges has been voted some of the best food truck food in the country, and it was so delicious, I didn’t even care that I froze while eating ice cream outdoors.

I would have kicked myself had I let my girl leave town without trying a slice of classic NYC-style pizza. She eats super slow, but she finished her slice exactly as I finished mine. In the 20 years I’ve known her, I’ve never seen such a thing.

And the blood orange popSorbetto was so freaking delicious. I took it home and shared it with Easy because it was that cold outside that it didn’t melt in the 40 minutes it took us to get from the Village to Bed-Stuy. I am looking forward to trying the frozen hot chocolate some Saturday after the soup kitchen once it’s really warm outside.

All of that delicious food was made possible because of a simple online search and hopping from place to place based on what Google told me was nearby.

So sometimes online sucks. But I have to admit for every problem I encounter, the internet usually has a solution if I’m patient enough to reword my Google searches. 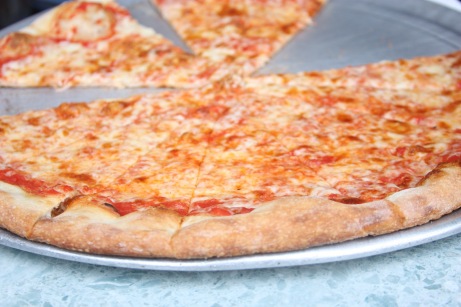 This entry was posted on March 19, 2014 by Chicago-Style Girl. It was filed under Family/Friends, Food/Drink and was tagged with friends, Greenwich Village, New York City, technology.